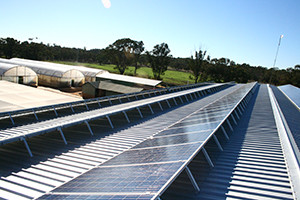 Commercial Solar Swan Hill Victoria. If you said to me not so long ago, what has Click Control Systems got to do with Australian produced wine and fruit, I would have said not much. But sure enough we now have a lot in common.

Chislett Farms in Swan Hill are an Australian owned family business that produces a range of fruits and wines. We were first introduced to Chislett Farms by a friend of ours who does their maintenance work. The electricity bills were putting a strain on their business and they needed help. He told us that they wanted a way to cut down on their electricity bills and weren’t sure on what they could do.

Why did they need solar?

We went out and had a look at their operation. It was impressive with the amount of specialised fruit including their own variety of oranges. Not to mention their very own wine label, “Regent Wines”, named after the spectacular and endangered Regent Parrot which frequents their property.  This is a piece of Australiana worth preserving.

In our meeting, we discovered that they wanted a temperature controlled environment that used a large amount of power during the day. This system powered water pumps for citrus fruits such as the previously mentioned oranges and Avocados. It also used a lot of electricity thus also was very expensive to run.

There’s more to a solar system than meets the eye

As in many cases we come across one major challenge with the design of the system. That was working with the local electricity provider Powercor and the regulations that they have within their system. With all energy companies, there is a certain level of administration and legal framework that you must work within. Otherwise you won’t get to have the Solar that you want because it may play havoc with the existing electricity grid.

As we do with all our clients, who come across energy supplier agreements, we took control of the situation and did all the negotiations on behalf of Chislett Farms. In this case Powercor did a technical assessment of the design and a network connection agreement was established. This costs more than $2000 to complete. With those amounts you don’t want to get it wrong so it is always better to leave it to someone who knows what they are doing.